Although the September weather forecast was poor our group decided to proceed Niagara Bicycle Touring anyway, after all the campground reservations had been made and some had been training for weeks. This trip was to be on the Canadian side of the border.

We had started the cycle tour by taking the GO commuter train from Toronto to Burlington and then a short 12 km ride to Bronte Provincial Park. On weekends the train goes to Niagara Falls and carries bicycles, there is a weekend pass available.

The next day had to be one of the toughest sections of the trip as we navigated traffic to the Waterfront Trail, actually a short ride. We followed the Waterfront Trail west and through Hamilton where we continued to the Dundas Valley. Here we joined the Brantford to Paris Rail Trail, for 32 km (20 miles) riding through the countryside. Then we joined the local Brantford Trails which went over the Grand River and right by the entrance to Brant Conservation Park, our campground for a distance of just over 90 km.

The tenting area of Brant Conservation Park was nearly empty during our September visit so it was easy to access the showers. I also checked out the park’s Milkes Dam Walking Trail on the Grand River which runs along a canoe portage for a good portion.

Our plan was to cycle a route that took us to Simcoe where we would join the Lynn Valley Trail which would lead us to Port Dover on Lake Erie, famous for its restaurants featuring perch. We were then to continue to Turkey Point Provincial Park.

However, the forecast was for heavy rain the next day so we skipped Turkey Point and rode along the Grand River, through the Six Nations Reservation to Dunnsville and Rocky Point Provincial Park, a distance of 100 km. Surprisely for late September this park was very busy. Our campsite was near the beach and we could hear the waves lapping against the shore.

We had a sag wagon and no one felt like cooking so it was off to Squires Pizza on a dinner run in Dunnsville as the rain started. The sag wagon also carried a kitchen tent so everyone in our group of 8 was dry as we enjoyed the pizza.

The rain stopped in the early morning and it was actually a nice day so a walk on the park nature trail was in order. Again, for dinner it was back to Dunnsville, this time to a award winning Fish and Chips wagon. By the time we got back to the campsite with the food the winds had picked up and so had the rain. The kitchen tent fits 2 picnic tables perfectly which was convenient as we enjoyed our dinner by the camp lantern.

Again the rain stopped in the early morning but we woke up to puddles of water everywhere. Fortunately, no one had their tent flooded.

Today the route took us along the shores of Lake Erie on the Great Lakes Waterfront Trail. Most of the route was along very scenic County Road 3 with almost no traffic. Coming into Port Colbourne the route went along the town’s bike path and eventually to the Welland Canal. There is a paved bicycle route along the Welland Canal going all the way to Lake Ontario but that was not our goal today.

After lunch at a Café beside the canal we continued along the Canada US Friendship Trail, a very flat rail trail which took us right to our campground. Windmill Point Park is a private campground set around a former spring fed quarry. Our issue was setting up the tents in the fierce winds. Fortunately, there was an event tent not in use which seemed to protect us from the winds somewhat when we sat down to dinner.

Again, it was raining lightly when we woke up but by the time, we finished breakfast it had stopped and the sun came out. We continued our cycle tour along the Canada US Friendship Trail into Fort Erie.

Right by historic Fort Erie (also the river from Buffalo, NY) we joined the Niagara Recreational Trail. This scenic bicycle trail follows the Niagara River and Niagara Parkway to Chippawa where we stopped for lunch beside the Tim Horton’s and river.

Then continuing along the bike path over the power station where you need to go on the road, but we stopped to view the famous falls. Continuing along the road to just outside of the city of Niagara Falls after a long uphill the separate cycle path restarted. Past famous attractions including the whirlpool, botanical gardens, floral clock and Queenston Heights Park.

At Queenston we turned onto Regional road 81 over the Welland Canal and through St. Catharines to Jordon Station and Big Valley Camping Resort. We were lucky to arrive when we did as the owner mentioned they were expecting over 300 cyclists the next day.

Along the Waterfront Trail through wine country with vineyards on both sides of the route. Then it was along the shores of Lake Ontario back to Burlington to end our week-long journey. We had seen a lot of history, scenic roadways, massive waterfalls and much more.

Bicycle touring is as much about what you experience as the cycling. How-to information, product reviews and creative solutions for common problems for exploring the world on two wheels!

As an Amazon Associate I earn from qualifying purchases.

Why I Am Taking a Self-Guided Bicycle Tour

Getting to Europe with Our Bicycles

Bicycle Touring the Icefields Parkway through the Rockies 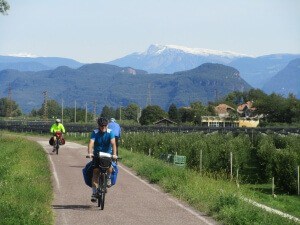 Should you use rental bikes while bicycle touring

7 Awesome Tips for Bike Touring on a Budget

Lost Bicycle Touring in Europe and No Cycling GPS

Bicycle Touring with a Bivy Tent